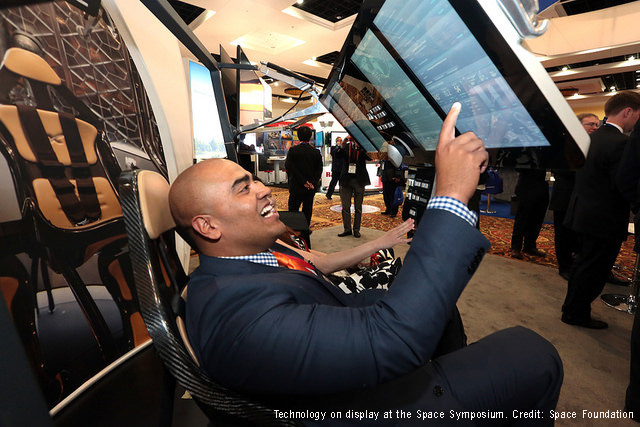 Colorado Builds on History as Launchpad for Space Exploration

NASA spacecraft New Horizons, which blew minds last year with close-up images of Pluto, is now more than 3.2 billion miles away from home — which some might place more precisely in Colorado.

New Horizons, which is headed to a belt of ancient, icy mini-worlds at the edge of the solar system, is being led in part by a research institute in Boulder. Key parts on the craft were developed in the state, including the first student-built instrument ever to fly on a NASA planetary mission: a dust counter developed at the University of Colorado.
Cooperation within the aerospace community in Colorado, on projects like New Horizons and others, helps explain why Colorado is the second-largest aerospace economy in the nation. Aerospace workers in the state made a collective $3.2 billion in 2013.

“The Colorado aerospace industry is so successful because all of the different segments within the ecosystem work well together,” said Chris Chavez, director of government affairs and communications at the space launch services venture United Launch Alliance. “There’s a willingness and an openness to work together to achieve common goals.”

A History In Aerospace

Colorado became an aerospace mecca in the 1950s, when Lockheed Martin (then Glenn L. Martin Co.) chose the Waterton Canyon, southwest of Denver, as a site for building Titan intercontinental ballistic missiles. The location could not be reached by a naval attack from either coast.

Farther north in Boulder, the Ball Brothers Co. pursued a technology to improve its glass canning jar operation that turned out to be far better suited for rocket controls. To maximize the potential, the company created Ball Aerospace as a subsidiary.

Today, the industry comprises eight major aerospace contractors and 400 smaller space-related companies. About 57 percent of the state’s aerospace companies have 10 or fewer employees, according to Vicky Lea, director of aerospace and aviation for the Metro Denver Economic Development Corporation.

There are also multiple military space commands and bases in Colorado, as well as a leading aerospace university and a developing Spaceport. A defense community south of Denver and a strong entrepreneurial community in Boulder have also been known to mix it up with the aerospace crowd.

“I think the best way for us at Blue Origin to help other space entrepreneurs is to solve that problem of getting payloads into orbit at an incredibly low cost,” Bezos said in April at the Space Symposium, an annual event in Colorado Springs that’s now in its 32nd year.

Custom Microwave President Clency Lee-Yow attended the space symposium for the first time as he tries to double the size of his business in five years.

“We did not’t expect the kind of contacts and networking opportunities we are seeing,” he said. “These are exchanges you cannot get by sitting in the office or making phone calls.”

Strong state support is yet another reason Colorado is a top aerospace hub. The state encourages industry growth with a business-friendly climate, a highly educated workforce and a 4.64 percent corporate income tax rate, said Jay Lindell, the aerospace and defense industry champion for the Colorado Office of Economic Development and International Trade.

Colorado also hires the most private aerospace workers per capita in the country, providing 163,000 space-related jobs.

Heather Bulk, president and CEO of Special Aerospace Services, is helping to fill those jobs. She used a $250,000 grant from the office of economic development to develop an apprenticeship program that offers students, employee referrals and other participants paid manufacturing training.

The company will offer some apprenticeships to women who escaped domestic violence so they can support their families.

“We are very, very passionate about giving opportunities to those who would not otherwise be exposed to or have access to those opportunities,” Bulk said.

The grant program illustrates a commitment by Gov. John Hickenlooper to support advanced industries such as aerospace that increase long-term growth and competitiveness in Colorado.

The apprenticeships help Colorado, in turn, by providing training that keeps aerospace and manufacturing jobs in the state, Bulk said.

“For all the nurturing and care that we’ve received as a small business, I think we owe it to Colorado to give back,” she said.

The article may also be found at Forbes: Colorado Builds On History As Launchpad For Space Exploration